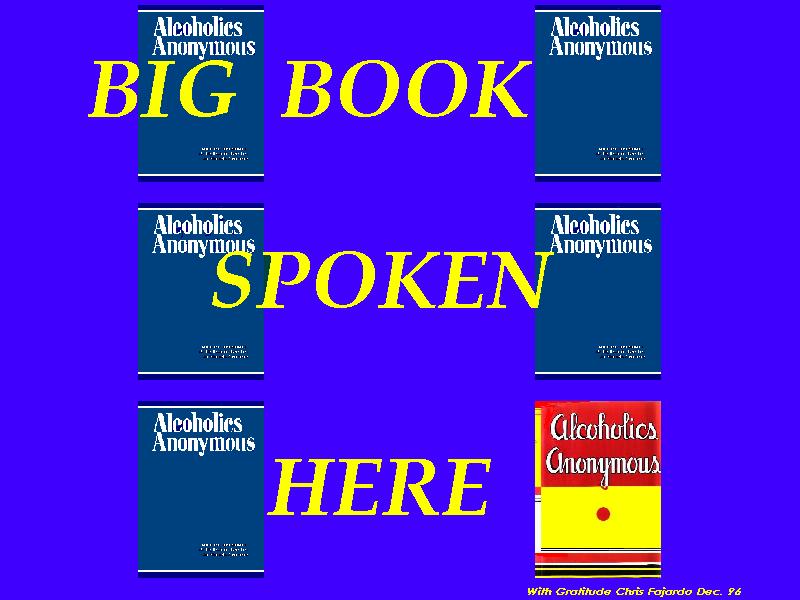 As a Professional Alcohol & Drug Counselor I am interested in assisting my profession in refocusing on the 12 Steps, the most effective method of addressing addiction in history.

This article outlines some important thoughts about Alcoholics Anonymous and the field of Alcohol and Drug Addiction. It was published in the ADVISOR the newslettwer of the Texas Association of Addiction Professionals in April, 2000.

Alcohol/Drug Counseling and the
Twelve Steps of ALCOHOLICS ANONYMOUS

Society has attempted to "treat" or control alcohol and drug problems since
recorded history, with notable efforts such as the Washingtonians in 1840, and
Prohibition in 1919.

The most important development in this century pertaining to the treatment of
alcohol and drug problems occurred in 1935, as the program of Alcoholics was
begun and developed. This program has its origin in the religious movement called
the Oxford Groups. Bill Wilson (co-founder of AA) himself, was quick to acknowledge
that the principles of the Twelve Steps are the common property of all mankind.

Nonetheless, Alcoholics Anonymous gave the world the Twelve Steps that have
been and are continuing to be the foundation of recovery for millions of alcoholics
and addicts - and others - worldwide. In an article published in 1939 in the medical
journal Lancett , ("A New Approach to Psychotherapy in Chronic Alcoholism"), Dr.
William Silkworth describes the process and principles of recovery from alcoholism.

He states: "Once the patient agrees that he is powerless, he finds himself in a
serious dilemma." This is, of course, Step One of the Twelve Steps of Alcoholics
Anonymous.

With courage, he goes on to describe the solution to this powerlessness as being
spiritual in nature; he explains that when following directions given him by fellow
alcoholics, "the patient experiences the profound mental and emotional change
necessary for a complete recovery from alcoholism".

Citing the Book "Alcoholics Anonymous", Dr. Silkworth states that "the first half
of the book is aimed to show an alcoholic the attitude he ought to take and precisely
the steps he may follow to affect his own recovery."

The word "precisely" is clear, strong and direct; it means that if we change the
formula, we change the outcome. The Twelve Steps are a proven formula for
recovery and are certainly necessary for good treatment outcomes.

In 1996, the American Society of Addiction Medicine devoted five chapters to the
Twelve Steps - one full section of their Manual.

The Twelve Steps have demonstrated effectively the ability to:

2) define the solution, and

3) demonstrate a program of actions necessary to bring about recovery.

As the effectiveness of these Twelve Steps demonstrated their ability to identify
the problem, define the solution, and design a program of actions necessary to
bring about recovery, professionals began to take note.

The first person to have taken the title of alcoholism counselor was Courtney
Baylor in 1913. His influence on the development of the profession is evident to this
day. "The Common Sense of Drinking", a book that influenced both Dr. William
Silkworth and Bill Wilson, was dedicated to Courtney Baylor by its author, Richard
Peabody.

The idea that complete surrender had to precede getting sober (AA's 1st Step)
came directly from Peabody's work. Early efforts in Akron, Ohio (1935) by Dr. Bob
Smith and in Wilmar, Minnesota (1951) by Dr. Nelson Bradley began to teach the
principles of recovery recorded in the textbook "Alcoholics Anonymous".

The "Minnesota Model" was directly born out of the work of Dr. Bradley and Dr.
Dan Anderson (Hazelden) when they began to mold a "team" of people which
included alcoholics and non alcoholics.

Many people in Social Work, Medicine, Psychology and Theology began to realize
the immense power of the Twelve Step recovery program outlined in the AA Book.
The vast majority of hospitals and treatment centers in this country today call
themselves "AA oriented".

This has come to mean in most cases that AA meetings happen on site and/or
patients may be transported to meetings off site, or the staff may lecture
occasionally or even frequently about the steps.

Counselors may talk to clients/patients about the steps. Some programs
endeavor to "take" the client/patient through the first five steps (or less, or more).
Certainly most treatment professionals in the alcohol and drug field today
acknowledge that the steps are important, but...

During these uncertain times of managed care, HMO's, PPO's, DRG's, Health
Care Crisis, and reduced federal funding, many of us seem to be running for cover
and forgetting what works.

We were born out of a "self help" movement, although for some today, the self
help movements are new. Indeed, we have spawned many important new fields.

We have been responsible for the advent of Adult children of Alcoholics, and
countless other worthwhile movements. Alcohol and Drug Counseling is intended to
teach, counsel, guide, instruct, mentor, show the alcohol and drug client/patient
what they must know in order to recover from alcoholism and drug problems.
Certainly some understanding of Pharmacology, etiology, individual counseling,
family systems, family counseling, psychiatric conditions and disorders are
important but, the principles outlined in the Twelve Steps of recovery have been
and remain a FOUNDATION of the alcohol and drug field.

In a recent conversation with Dr. Robert Straus, a pioneer in this field, I
mentioned the apparent aversion to the conspicuous mention of Twelve Steps in
such NAADAC documents as the Scope of Practice.

The Doctor's response was, "It would be like a program for Political Science not
mentioning he Declaration of Independence". Alcohol and Drug Counselors now
more than ever do not need to apologize for practicing a discipline that was born
out of an effort to teach Twelve Step principles.

It is time that we recognize that our efforts to look just like other professionals,
(we all have our place in relieving human suffering) is not the answer.

It is part of the problem !

As we distance ourselves from the Twelve Steps, because they were first
identified by "drunks in a self help program", we forget these are principles for all
mankind and they work !

We will lose our entire focus as well as our profession, if we continue to be fearful
that our fellow professionals won't accept Alcohol and Drug Counseling as a
profession because we have "self help" roots.

The founding fathers were not all well educated men when the Declaration of
Independence was written but it is the foundation of our country.

Certainly, the Twelve Steps at Alcoholics Anonymous are the foundation of our
Profession.